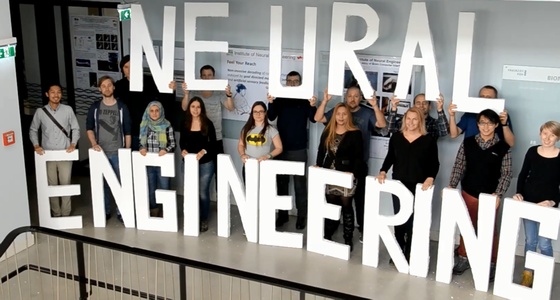 Virtual trainers (VTs) in mobile devices can support users in odd learning tasks like vocabulary acquisition in a second language. Laboratory research has shown that if gestures accompany vocabulary items their retention is better than if the words are only read and / or heard. Here, in an augmented reality environment (AR), a VT trains German speaking participants to 27 bi- and three-syllabic words of an artificial language (Vimmi). Each Vimmi word is paired to a function word in German. The participants are divided into two groups. Group 1 learns 27 word pairs by observing the VT that performs symbolic gestures to the function words. Group 2 learns the word pairs by observing and additionally imitating the gestures performed by the VT. Memory performance is assessed. Additionally, reaction times in word retrieval are measured by presenting words and gestures as cues. After the last training session, multichannel EEG is recorded during word retrieval.